Weighing liquids dynamically is a challenge. Material flows in the chemical and petrochemical industries are high-value commodities where every litre is worth its weight in gold. But liquids are now transported by rail, and they need time to settle and become still before they can be accurately weighed. Errors in monitoring can result in heavy losses, as the following example illustrates. Let’s assume that every day, in one of 12 tank wagons each containing 50to of refined hydrocarbon, 10% is missed. Over 200 working days a year that amounts to 12 000to or 20 whole train loads. This could mean losses of millions of euros. Random sampling is no solution. The material flow needs to be continuously recorded.

MULTIRAIL® LiquidWeight from Schenck Process eliminates known disturbing factors from the process of weighing liquid goods and operates with precision at speeds of up to 10 km/h. If not being weighed, wagons can travel at the permissible speed for the track. The user saves time and benefits from a high degree of automation, considerably lower error rates and increased scale performance. A worthwhile investment that has already proven itself for customers such as OMV, Basell and Dynea.

Cost factor – time: Static train scales can be used to weigh tank wagons with a high level of precision. But this takes time, because the scales are often located on a side track owing to speed restrictions. Diverting and uncoupling the wagon from the train set, shunting, stopping – all of these operations set the valuable liquid in motion. It starts ‘sloshing’ about. It can take 20 minutes or more for the liquid to reach the state of stillness required by the Office of Weights and Measures. Even if you are only weighing 12 wagons a day, you need around four hours to weigh the whole train.

Cost factor – staff: To carry out all the operations described above you need not just a locomotive but a train driver, a shunter, a weighing operator and a flagman.

Disturbing factor – vertical forces: The liquids in the train set are subject to various dynamic influences. On the bogie, the load is distributed differently to the four wheels depending on the height of the track. Additional vertical forces in the area of the couplings are influenced by the position of the track and vertical movement of the wagon. Vertical vibrations of the wagon make the liquid move faster. Combined weighbridges cannot solve this problem, because independent of their design, they can represent an additional disturbing factor. The design of the weighbridge is completely different from the structure of the track. In addition to the variations in rigidity there is another source of disturbance at the point where the two meet – the gap between the rails.

Schenck Process has managed to reduce these disturbing factors and cost factors year on year with the development of its MULTIRAIL® technology. The weighbridges have been eliminated. The track has been modified as little as possible. The gap between the rails has also been eliminated. Wagons are weighed on the main track. The train is driven slowly and evenly across the scales, which are now long enough for all the wagon’s wheels to be weighed simultaneously for an extended period. The system provides efficient, accurate monitoring, which is largely automated, and a considerably reduced error rate. MULTIRAIL® LiquidWeight is capable of calibration in accordance with OIML R 106-1 and has calibration approvals for DE, FR, AT and CH, including approvals for EBA, DB and ÖBB. 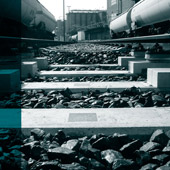 With an unrivaled global network of operating companies and competent partners, the name Schenck Process is synonymous throughout the world with process expertise and well-engineered measuring technology for weighing, feeding, conveying, screening, automation and air filtration.

We use cookies to optimize our website’s functionality and continuously improve your experience.

Additional cookies are used only with your consent. In this context, we use Google Analytics in the anonymized version to access, analyze, and save information, such as the characteristics of your device and certain personal data (IP addresses, navigation usage, geolocation data, or unique identification features. (YouTube, FB, etc.))

With regard to the processing of your data in the USA by Google: By clicking on [“Agree to all”], you also consent to the processing of your data in the USA in accordance with Article 49 (1) (a) of the GDPR. According to the European Court of Justice’s current case law, the USA is assessed as a country with an inadequate level of data protection by EU standards. In particular, there is a risk that your data could be processed by US authorities without you becoming aware of it or having access to legal remedy. If you click on [“Save preferences”] without having selected “Analytics”, the transfer of data described above will not take place. Further information can be found in our data protection information.

Imprint
Save preferences Agree to all
×

Given the tragic situation in the Ukraine we want to inform our investors about SPG’s business in the conflict region:

We are continuing to monitor the situation very closely. Any further adjustments or changes will be advised separately.