The weighing of liquids being transported in tank wagons is a particularly challenging task for measuring and weighing technology – these substances are in almost constant motion, so precisely gauging their weight requires special techniques and methods. MULTIRAIL® LiquidWeight from Schenck Process is the ideal solution for this difficult process: we have developed this weighbridge specifically for the legal-for-trade weighing of liquids transported by rail.

Liquids are particularly important commercial materials in the chemical, petrochemical and processing sectors. Speed, reliability and precision play a crucial role in maximising the efficiency and economic productivity of a companies’ material management system. Using MULTIRAIL® LiquidWeight, it is now possible to obtain an outstandingly precise, verifiable (as per OIML R106-1) reading of the weight of tank wagons and even of entire trains. Depending on a customer’s specific requirements, our weighbridge system can generate figures with an OIML accuracy class of 0.2 or 0.5 for wagons with a weight of up to 150 tonnes. MULTIRAIL® LiquidWeight has been specially designed with a concrete weighing sleeper that is fitted with high-precision sensors which transmit all forces and moments and which provide an ultra-accurate reading of the vertical force components.

The winning feature of Schenck Process’s solution is how it is integrated into the track without the cutting of rails or use of foundations. This eliminates interference from unwanted wagon motion while they pass over the weighbridge – this represents a real advantage in the high-precision, in-motion weighing process of rolling stock, especially when transporting liquid goods. Our system can be calibrated to suit wagon speeds of up to 10 km/has well as allowing trains to travel at the full speed permitted for a particular line if they are not to be weighed. Germany’s Federal Railway Authority (Eisenbahn-Bundesamt, EBA) has approved the use of our weighing sleeper.

Our customers benefit in many different ways, such as reduced maintenance work and – above all – significantly faster weighing processes and lower manpower requirements. Static weighing processes require tank wagons to be uncoupled and weighed one by one, but our in-motion system means coupled wagons can be weighed as a train passes over the Schenck Process weighbridge at a constant speed. This also does away with the obligatory waiting period necessary for static weighing processes: thanks to MULTIRAIL® LiquidWeight, there is no need to wait for the liquid in tank wagons to almost come to a complete standstill.

Using MULTIRAIL® LiquidWeight, our customers can weigh far more wagons with legal-for-trade accuracy in a given length of time as they could using conventional weighbridges. This enables our customers to cut their weighing costs substantially.

Sensory electronics and customised PC systems are used to capture and process weight readings and additional data. MULTIRAIL® LiquidWeight has received its EC type examination certificate, which means it can be used as a legal-for-trade weighing system throughout Europe. 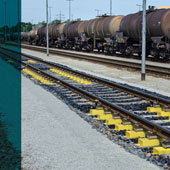