Brown began his career in 1983 with Deloitte Touche where he spent seven years serving in both audit and tax capacities before taking a position at the Didde Corporation where he was promoted to CFO. In 2000, he joined MAC Equipment Inc. as the CFO and later the CEO. MAC Equipment Inc. became known as Mac Process LLC in 2011 when acquired by the Schenck Process Group. Mac Process is one of the leading providers of air filtration and pneumatic conveying technology. Brown holds a Master of Science in Accounting from the University of Missouri-Kansas City and is a Vice President at Process Equipment Manufacturers Association (PEMA).

“We thank Stewart Murdoch for his long and successful support. He has made a considerable contribution to driving the international development and growth of Schenck Process. We are pleased that Jay Brown, who is particularly experienced and highly valued, will succeed him,” said Dr Jochen Weyrauch, President and CEO of Schenck Process. 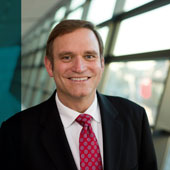