Schenck Process will take over the in-motion-scale business of Pfister Waagen Bilanciai GmbH of Augsburg, Germany

Effective from 29th September 2006, Schenck Process will take over the in-motion-scale business of Pfister Waagen Bilanciai GmbH of Augsburg, Germany. Schenck Process’ MULTIRAIL® technology will now be further strengthened in its leading market position for force-measuring and weighing technology for rail vehicles in motion.

“In the market for dynamic in-motion-scales, the weighing and measuring sleeper concept has been well received“, says Peter Groll Vice President Transport Automation for the Schenck Process Group. “Presently, in order to satisfy our customer’s growing requirements for further applications, we are working on the third generation of MULTIRAIL® sleeper technology. Against the background of increasing commodity and energy prices there is a greater demand for higher accuracy and reliability. Now, we can concentrate even further on the enhancement of this innovative technology“.

With a focus on static rail weighbridges, Pfister Waagen Bilanciai GmbH remains active in the railway market. “The high development costs associated with producing weighing systems for road and rail has led us to re-focus our business. Our focus on static rail weighbridges perfectly matches with our objectives in the area of weighing technology for the roads“, says Harald Welscher, Managing Director of Pfister Waagen Bilanciai GmbH.

MULTIRAIL® technology is used in the area of track based installations for the ‘in-service’ operation as well as force-measuring and weighing technology for maintenance and repair workshops. With its help, trains, or rather its individual wagons, are weighed quickly with legal-for-trade accuracy. In the same way, dynamic wheel loads and wheel load distributions can be detected. Furthermore, the technology is able to analyse damage to the wheels of rolling stock, which is essential to avoiding damage to the track as well. 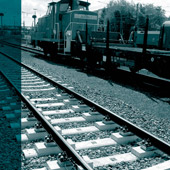