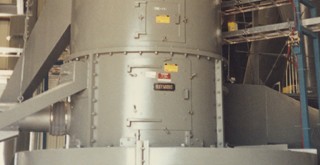 Bentonite is a natural absorbent aluminium phyllosilicate clay in the Montmorillonite family that is formed by the decomposition of wind-borne volcanic ash.

Due to the physical nature of this material, a Raymond® roller mill produces the best results at the usual fineness of grind. Bentonite usually contains 35 to 45% initial moisture in the deposit. This puts it well beyond the simultaneous drying and grinding range. The material is usually prepared by reducing it to ¾” size in a clay cutter or slicer. A Bartlett-Snow™ rotary dryer is then used to bring the moisture down to about 8% total moisture and in this condition the material can be pulverized without further drying.

Bentonite is used in drilling fluids to lubricate and cool the cutting tools, to remove cuttings, and to help prevent blowouts. Much of bentonite’s usefulness in the drilling and geotechnical engineering industry comes from its unique rheological properties. Bentonite has been widely used as a foundry-sand bond in iron and steel foundries.

The United States is one of the top producers of bentonite, with almost a one-third share of the world’s production, followed by China and Greece. Most high-grade natural sodium bentonite is produced from the western United States in an area between the Black Hills of South Dakota and the Bighorn Basin of Wyoming, and the Tokat Resadiye region of Turkey. Mixed sodium/calcium bentonite is mined in Greece, Australia, India, Russia, and Ukraine.